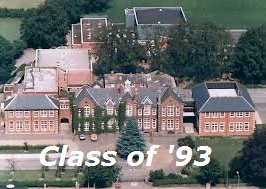 Some of my old high school friends are starting to plan a reunion. It’s (gulp) 20 years since we sat our GCSE exams, so seems an appropriate time I suppose.

I was chatting to an old friend about it and he said he wouldn’t be interested in going to his, but apparently I should go because “everyone liked you”. And since he said that I’ve given it a LOT of thought.

It never felt like that at school. But looking back, maybe I didn’t have as bad a time of it as I thought. Ok, perhaps I wasn’t really part of the ‘in-crowd’ all the time, but I seem to remember being accepted by most groups.

I guess I was harmless. No threat to anyone – just good old agreeable me.

At the time I felt I stood out. That I didn’t belong anywhere. Always the odd one out. But maybe I had it all wrong. Maybe, as a confused and hormonal teen I just didn’t realise that instead, I fitted in wherever I was. Maybe I worried about it much more than I should. But I guess that’s the typical mindset of the teenage girl.

I have to admit that now I do seem to get on well with most people. I’ve had a fair number of different jobs and I’ve always gotten on well with my colleagues. Obviously there are a few exceptions, but I never said I was Wonder Woman!

So I guess where I’m going with this is that even when we’ve got it good we still doubt ourselves to the point where we only see the bad. We really need to relax and enjoy the moment, because one day you’ll look back and that moment might be the one that stands out as being great.